1.6 – The History of the Automobile

The automobile has been around for a little more than 125 years!
Development of the Automobile – Where it all began

In the 1880’s, Karl Benz installed a small motor on a tricycle and the automobile was born. In 1896, Frank and Charles Duryea built the first American motorcar in Springfield Massachusetts. They manufactured the first of 13 of these gas-powered inventions.

In 1896, Buffalo New York was the first major city to pave all of its streets. At the turn of the century, 8,000 automobiles were on the road. General Motors incorporated in 1908. The first mile of rural highway was paved. Since more than 40 percent of the work force was involved in farming, rural roads were important links. The first gas station opened in St Louis Missouri at the turn of the century. Speedometers were installed on Oldsmobile automobiles. In 1903 Henry Ford founded the Ford Motor Company. Five years later he introduced the Model T.

The 1900’s
By 1915, 2.3 million automobiles were registered in the United States. About half of those were Ford’s Model T. Model T’s were affordable, easy to service, and available in any color you wanted as long as that color was black. In 1910, Barney Oldfield set a new speed recorded with a Blitzen-Benz at Daytona Beach Florida, at more than 131 miles an hour. The first Indianapolis 500 race was held in 1911. The Lincoln Highway, the nation’s first coast-to-coast highway, was marked between New York and San Francisco. Carl Fisher spearheaded the effort. He wasn’t the first to have this dream but he figured out how to organize and fund the project. Wisconsin was the first state to assign numbers and letters to roads and highways.

Insurance for automobiles is born
In Westfield Massachusetts, an enterprising mechanic built his own car and then insured it for $1,000 worth of liability. His premium was $7.50.

The federal government began a program to pave the way coast to coast. The first highway to connect the coasts was completed in 1927. Americans start “hitting” the road, traveling to National Parks, and making camping an American pastime. The new roads bring a complete transformation to the entire country.

The Automobile and the Future

The automobile is one of the most important possessions that we own. It gives freedom, education, and financial means. It has changed the entire way this nation looks. It has given us millions of miles of highways to transport our goods. The automobile may change in design, but it is here to stay. The sky is the limit to where we will go with the automobile. We have developed vehicles that run on electricity and solar power in our pursuit of a new source of power. Gasoline emits too much pollution and we are in dire need of a new less harmful solution that is as affordable as Ford’s Model T was to consumers back in the 1920’s.

We will see in the future new inventive ideas that will lead us into the new millennium and beyond. No doubt that these ideas will continue to change the way we think, act and respond. They may even change the way we live.

Dr. Horatio Jackson, with his chauffeur and dog, was the first person to cross the country in an automobile. It took 65 days to make their journey.

WE HAVE COME A LONG WAY!!!
Where will the automobile take us next? 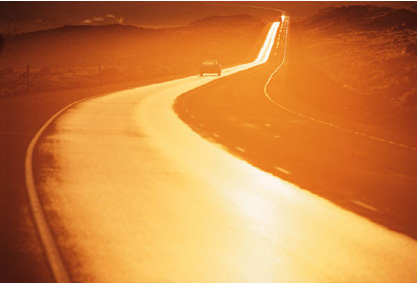