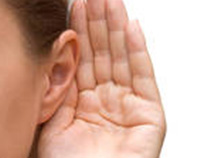 Auditory Acuity
How well and sharp you hear is important for safe driving. Your hearing can:

Partial Deafness
A hearing impairment that causes the inability to hear low to medium (softer) decibel sounds or sounds of certain frequencies.

Total Deafness
A hearing impairment that results in the inability of the person to hear, even the loudest of sounds. The person hears NO sound at all.

Hearing Care
Auditory acuity deteriorates with age. It is important to have your hearing checked periodically by a doctor because often changes in hearing occur so slowly that people do not notice them.

Considerations for Hearing and Driving

A hearing aid is a device used to help hard-of-hearing people hear sounds better. One of the first hearing aids, the Metal Ear,

was created in the 17th century and was made to be put over ears. The hearing aids created in the beginning of the 19th century were bulky devices that would sit on tables. Later, in the 19th century, ear trumpets and cones were used as hearing aids. The first full-scale manufacturer of hearing aids was Frederick Rein of London in 1800. He produced ear trumpets, hearing fans and conversation tubes. These instruments helped amplify sounds while still being portable. There was one major flaw to early hearing aids. This flaw was that the longer or wider the instrument, the greater the sound. So in order for these instruments to be portable, it had to be downsized, which caused it to not be as beneficial to the individual. Finally in the late 1800s, the acoustic horn, which was a tube that had two ends and a cone that captured sound, was eventually made to fit in the ear. Toward the late 19th century, individuals pushed for the idea of hidden hearing aids.

This push caused for a change in hearing aids to be more invisible. As a result, hearing aids would be hidden in couches, clothing and