Traffic lights are devices placed along, beside or above a highway, roadway or other routes to regulate the flow of traffic, including motor vehicles, bicycles and pedestrians. The most common type of traffic light has three lenses however some have two, depending on what it is regulating. The position of the three colored-lenses on most traffic lights is red on top, yellow in the middle and green on the bottom. The sequence in which they are lighted is green to yellow, yellow to red and red to green.

Who Invented The Traffic Light

While I was waiting for the light to turn green, my mother chose once again to test my knowledge, this time by asking me if I knew who invented the traffic light. I think you can recall how the rest of this conversation went from my previous article entitled “In a Nutshell,” so why don’t we move on to the business at hand, which is my telling you what I found out about this particular invention and the man behind it.

Garrett Augustus Morgan was born in Paris, Kentucky on March 4, 1877. Morris started working at the age of 14 after 6 years of schooling. His interest in mechanics was sparked by a job as a sewing-machine adjuster for a clothing manufacturer. He received wide recognition for his outstanding contributions to public safety. In 1923, Morgan received a patent for his new concept (U. S. 1,475,024 issued in 1923) a traffic signal to regulate vehicle movement in city areas. GO and STOP signs were systematically raised and lowered at intersections to bring order out of the chaos of regulating pedestrian and vehicle traffic on city streets. In years that followed his invention, after he sold it to the General Electric Company for $40,000, he received patents in England and Canada for similar signal devices. Morgan’s inventions were eventually replaced with the light signal devices used today. In addition to the traffic light, Garrett Morgan also invented the safety helmet and the gas mask, which firefighters in many cities in the early 1900’s wore, and for which he was awarded a gold medal at the Second International Exposition of Safety and Sanitation in New York in 1914. The gas mask Morgan invented in 1912 (U. S. 1,113,675 issued in 1914) was used during World War I to protect soldiers from chlorine gas fumes. In 1916, Mr. Morgan used his own mask design to rescue men trapped by a gas explosion in a tunnel being constructed under Lake Erie. Following this disaster, which killed twenty-one people, the City of Cleveland, Ohio honored Garrett Morgan with a gold medal for his heroic efforts. Morgan was known as an astute businessman and started business enterprises with many of his inventions, including a tonic for straightening hair, a preparation which he marketed under the name G. A. Morgan Hair Refining Cream. Morgan also published the Cleveland Call, a weekly newspaper devoted to news about the African American community. Morgan received a U.S. government citation for his traffic signal and a First Grand Prize Golden Medal by the National Safety Device Company at the Second International Exposition of Safety and Sanitation in 1914, among other honors and awards. Garrett Augustus Morgan died on August 27, 1963.

A solid red light means to stop completely behind the limit line, crosswalk, or before entering the intersection.

A solid yellow traffic light means that the light will soon change to red.

A yellow arrow means that you should be prepared to obey the next signal that appears, which could be a solid green or red light, or a red arrow.

A green light means that you may proceed straight through or make a turn as noted below after the intersection is cleared of vehicles, bicycles and pedestrians.

A green arrow means that you may proceed in the direction that the arrow points (i.e., left, right, or straight), after you yield the right-of-

way to any vehicle, bicycle or pedestrian still in the intersection.

Arrows in the shape of an upside-down U are used to control lanes of traffic that may make U turns only. You should obey red,

yellow and green U-turn only arrows in the same way that you would obey horizontal arrows of the same color. 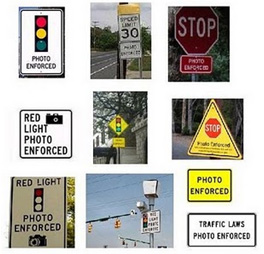 To control the direction and the flow of the vehicles through the intersection, there will be designated lanes that must go right, forward and left.