5.1- Construction of the Automobile

Frame and Body
The purpose of a vehicle’s frame is to support the body, engine and other components. The frame along with the body is largely responsible for the structural integrity of the vehicle. The wheels and tires through the vehicle’s suspension system support the frame itself.

Engine
When you start your car:

Fuel and Air
The function of the fuel system is to store and supply fuel to the cylinder chamber where it can be mixed with air, vaporized and burned to produce energy. The fuel, which can be either gasoline or diesel, is stored in a fuel tank. A fuel pump draws the fuel from the tank through fuel lines and delivers it through a fuel filter to either a carburetor or fuel injector and then delivered to the cylinder chamber for combustion.

Gasoline
Gasoline is a complex blend of carbon and hydrogen compounds. Additives are added to improve performance. All gasoline is basically the same, but no two blends are identical. The two most important features of gasoline are volatility and resistance to knock (octane).

Diesel
Diesel fuel, like gasoline is a complex blend of carbon and hydrogen compounds. It too requires additives for maximum performance. Standard diesel fuel (sometimes called diesel oil) comes in two grades: Diesel #1 (or 1-D) and Diesel #2 (or 2-D). The higher the cetane number, the more volatile the fuel. Most diesel vehicles use fuel with a rating of 40 to 55. You won’t have to worry about which type to use because all diesel automakers specify Diesel #2 for normal driving conditions. Truckers use Diesel #2 to carry heavy loads for long distances at sustained speeds because it’s less volatile than Diesel #1 and provides greater fuel economy. Diesel fuel also is measured by its viscosity. Like any oil, diesel fuel gets thicker and cloudier at lower temperatures. Under extreme conditions, it can become a gel and refuse to flow at all. Diesel #1 flows more easily than Diesel #2, so it’s more efficient at lower temperatures . The two types of oil can be blended, and most service stations offer diesel fuel blended for local weather conditions. 2D fuels are used in warmer weather and are sometimes mixed with 1D fuel to create a competent winter fuel.

Fuel Tank
The Fuel tank is used to store the gas. All tanks have a fuel filler pipe and a fuel outlet line to the engine and a vent system. The catalytic converter cars are equipped with contains a filler pipe restrictor so that leaded fuel, which is dispensed from a thicker nozzle, cannot be introduced into the fuel system. All fuel tanks must be vented.

Note: These pumps look identical, so be careful when replacing a fuel pump. Make sure that the proper one is used. Fuel pumps are rated by pressure and volume. When checking fuel pump operation, both specifications must be checked and met.

Vehicle Power Train
A vehicle’s power train consists of components that generate and transmit power to the wheels.

Vehicle Exhaust
After the gas explodes in the cylinders of the engine it is released into one or more exhaust manifolds and collect into one stream of spent gases from all the cylinders. The gases are then passed through a catalytic converter that chemically reduces the quantity of harmful pollutants and eventually passes by exhaust pipes through the muffler and resonator that reduce the noise from the explosion of gas in the engine. The gasses are then moved to the tailpipe which vents the hot gases away from the vehicle so that they will not collect underneath it.

Vehicle Cooling System
The heat caused by the friction of moving engine parts and the explosion of gasoline in the cylinders is removed through the vehicle’s cooling system. The coolant flowing through the passages inside the engine absorbs the heat. The coolant is a mixture of water and chemicals that protect the cooling system from corrosion lubricate the water pump and prevent engine from freezing. The coolant is largely stored in the radiator whose main purpose is to transfer the heat from the coolant to the outside environment (air) while it is being circulated by the water pump. The radiator is cooled by air flowing through it as you drive and by the radiator fan. Most radiators have a recovery tank, which is used to capture coolant as it expands due to heat and return it to the radiator when it cools. In order to allow the engine to quickly heat up to proper running temperature, the flow of coolant is controlled by heat sensing valve called a thermostat. 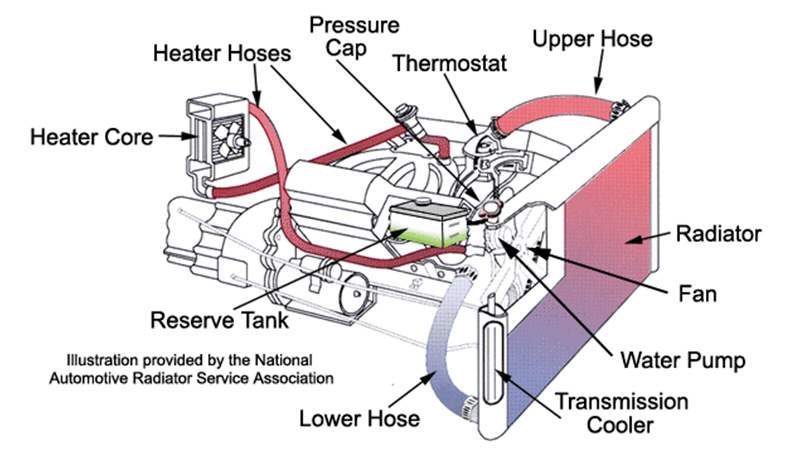 Electricity is distributed throughout your vehicle by various electrical circuits for lighting, operation of electrical motors, computers that control various functions, and radio, interior cooling, heating and ventilation system. The fuses are to disable a circuit that is drawing too much current to prevent a fire and protect the components that the circuit serves.

The purpose of brakes is to allow the driver to slow down or stop the vehicle,upon pressing down on the brake pedal. The brakes must be in top working condition, so that in an emergency the driver is able to stop completely without incident. The brake pads need to be maintained by repairing or replacing them since they get the most wear.

Both drum and disk brakes convert friction force to heat and if the brakes get too hot, they cease to work because they cannot dissipate enough heat. For both types of brakes, your stopping distance time is roughly proportional to the square of your speed, so if you double your speed you quadruple the distance to stop your car.

Since most cars on the road today have some form of Antilock Brakes (ABS), we should take a look at how they work and clear up some misinformation about them. Different manufacturers have their own versions of ABS values, specifications and part names. Always refer to the specific service and repair manuals for your vehicle.